What do former RECON Marine Isaac Camancho, and beauty pageant ice queen Tamara Post have in common? Not much, but the sparks fly, along with the bullets, as they race to save a 16-year-old girl from the clutches of a cult-leader.

Freelance investigator Isaac Camacho has a weakness for bitchy blondes, and no one fits the bill quite like former beauty queen and gold digger Tamara Post. Sheâ€™s sexy, feisty and on the run from a cult leader. Complicated women? Oh he loves them almost as much as he loves watching Tamara act like a total ice queen when he knows she burns white hot.

Calculating opportunist Tamara Post never cared what anyone thought about herâ€”except for her sister. But when her sister dies, itâ€™s up to Tamara to hide her teenage niece so the girlâ€™s dictatorial father canâ€™t marry her off to one of his disciples. The last thing Tamara has time for is Isaacâ€”a man who flirts as well as he fills out a pair of worn jeans and whose stubborn determination to help makes it hard to act as if sheâ€™s really as cold as she appear.

When the bad guys find her, thereâ€™s only one person Tamara can depend on to help keep her alive until her niece is safe. But once the life and death chase is on, itâ€™s not just their lives Tamara and Isaac are riskingâ€¦but their hearts.

“Okay.” He held up his hands in surrender. “You’ve got an excellent point there.”

The tension yanking her shoulders closer to her ears than they should be ebbed and her shoulders inched down a bit. That’s when he scooped her up in his arms, pivoted, and dumped her into the passenger seat all before she’d even gotten a chance to let out a yelp.

“Heavy-handed asshole?” He grabbed the seatbelt and dragged it down across her chest. “Giant prick?” He clicked it into place, resisting the urge to let his fingers linger on the sliver of silky skin between the top of her skirt and the bottom of her shirt that had become exposed when she’d twisted in his arms. “Handsome devil?” He flashed his patent-pending, panty-melting grin. “Big, strapping stud who can protect you?”

She didn’t even flutter her long lashes. “Jerk.”

“It’s more succinct, I’ll give you that.” He shut the door and circled the front of the truck, walking a little more bowlegged than normal.

This was wrong. He should not have a hard-on while being a Good Samaritan. Even for him, that was pretty low. She was Taz’s ex-wife. She tried to extort a million dollars from him and nearly blew his relationship with Bianca straight to Timbuktu. She had Wolczyk on her ass and a teenager who she’d technically kidnapped hidden away somewhere. And on top of all that, she wasn’t the least bit friendly or accommodating.

Fuck. His dick was just getting harder.

He opened the driver’s side door and got behind the wheel. Tamara faced straight ahead and had her arms crossed under her impressive rack. While he was questioning his ethics, his cock was questioning his sanity because normally he would be all over her. As it was, he grit his teeth, turned the key in the ignition, and pulled into traffic.

A few months ago when Taz asked him to do some background on his ex-wife who was pretending to be his current wife, Isaac had figured it was an easy job. He’d been right and wrong. He’d turned up the arrest warrants, the information about her dead sister’s ex-husband, Jarrod Fane, and the well-armed militia-like cult he ran and Tamara’s allegation that the bastard had been willing to sell his only child off to one of his followers to consolidate his power base. What he hadn’t discovered was where she lived, where her money was, or where she’d hidden her niece, Essie, after she’d grabbed the sixteen year old and hightailed it out of Idaho. That burned. He was a good investigator. Damn good. And she’d given him the slip. Shit. She still was and she was sitting right next to him.

He wasn’t giving up though.

“How’s the security at your house?” he asked, slowing down for a yellow light.

Just that. Nothing else. He’d eaten Popsicles that had been warmer.

“That good?” Not likely. She had access to all of the B-Squad tech but that didn’t mean she knew how to use it. According to Google, her talent in the eight gazillion beauty competitions she’d won had been baton twirling not setting up security systems.

“You know who’s after me?” she asked, not even a nervous wobble in her voice.

“Yes, ma’am.” He nodded. “Jarrod Fane. Age thirty-six. Second-generation leader of the Crest Society, with a two-hundred strong compound of armed followers and fellow nut jobs outside of Redfin, Idaho.”

Oh, the arrest warrants on her came from the county judge presiding over the nasty custody case involving Essie, but there were only a few people in that area not under Fane’s thumb. He was frat boy pretty, smooth and as dictatorial as any tyrant in a third world country.

If Isaac’s recitation shook her, she didn’t show it.

Her breathing remained as steady as her hands, folded in her lap. “Then you know I wouldn’t leave a damn thing to chance.”

“How did Wolczyk find you at the party?”

“Fort Worth isn’t that big of a city. If the great state of Texas gives someone a security or investigative license and you’re in the general area, I know who you are.” The light turned and he merged into traffic. “So how did Wolczyk find you?”

Read the full Chapter One Reveal with an exclusive section on each of the blogs below! 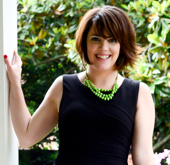 Award-winning romance author Avery Flynn has three slightly-wild children, loves a hockey-addicted husband and is desperately hoping someone
invents the coffee IV drip. Avery was a reader before she was a writer and hopes to always be both. She loves to write about smartass alpha heroes who are as good with a quip as they are with their *ahem* other God-given talents. Her heroines are feisty, fierce and fantastic. Brainy and brave, these ladies know how to stand on their own two feet and knock the bad guys off theirs.