What the Scot Hears by Amy Quinton 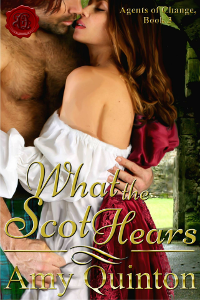 Amelia Chase, an out spoken American, is in England to find her long lost brother, the Marquess of Dansbury,  thanks to the info and help from an unknown benefactor that came just in time. She catches up to him at an inn, but is thwarted by his friend, a big taciturn Scot, who refuses to let her see him by any means, including locking her in her room so that they leave before her. That is just an opening salvo to a game where each tries to outwit the other while they steal horses, rooms, and leave teasing notes for the other to find. Circumstances put a halt to the games, but later, when she is to finally meet her brother, she is kidnapped and the Scot vows to find her and keep her safe.

Lord Alaistair MacLeod is an agent for the Crown on the search for a supposed spy, Amelia just happened to cross his path at the wrong, or was it the right time? He has secrets in his past which he keeps close since the one time he trusted, he suffered great loss and he does not want to repeat history again by trusting another. Despite his reluctance, he is determined to keep Amelia safe, eschewing his current task to do so before rejoining the hunt for the traitor. He decides to meet her again at his friend’s wedding, but she is kidnapped right under their noses. Now he has to find her, keep her safe, and shore up his heart and resist falling for her and her unique charm.

Amelia came to England due to the info and assistance of an unknown benefactor who told her of a long lost brother the Marquess of Dansbury. The first barrier to meeting her brother is the big Scot, but she is determined to meet her brother so exchanging barbs and pranks with the Scot does not slow her down. Just when she thinks she will meet her brother she is kidnapped and has to come up with a way to get free though she believes MacLeod will come to her rescue. During all of this there is the search for the traitor and a mysterious secret society to be wary of. Who is the mysterious benefactor and why has he gone to such lengths to help Amelia? Will the secrets Amelia holds be too much for Alaistair to deal with and keep him from opening his heart to love again?

This is the third of a series and I would not advise reading it out of order. While I liked the story I still felt that I was missing info in regards to the previous books and their characters. I found the banter and sexual tension that zinged between Alaistair and Amelia highly entertaining. It is a perfect case of opposites attract but when they finally got together it was a bit anticlimactic. If you are a stickler for period detail and the ballrooms of the times you will not find it here since the tone of the story is more modern and the setting takes place mostly in the countryside. The bit about the society fell flat for me since I did not read the previous books so I failed to grasp the menace they proposed.