When We’re Thirty by Casey Dembowski 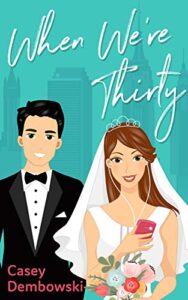 Hannah Abbott is almost living the dream. She has her own apartment in New York City and writes for Deafening Silence New York, an indie magazine about her favorite music, which just barely pays her enough to cover her bills but no health insurance. She is in a longish term relationship with her boyfriend, Brian. She receives her favorite flower, white carnations, at work on her birthday…one of the big ones… thirty. She first thinks her best friend Kate sent them, but she denies it.  Hannah is fairly sure Brian does not even know white carnations are her favorite, so she has no idea who sent them. At home that night she gets a friend request on Facebook from Will Thorne. They were best friends in college but lost touch after graduation. As she wanders down memory lane, someone knocks on her door, and when she opens it Will is on his knee holding a huge diamond ring up at her asking her to marry him.

Will Thorne has had a bad year. His fiancé cheated on him with his older brother and they are now engaged to be married. To make matters worse, he and his older brother work together at the family business, so he feels like he gets his face rubbed in it all day every day, which drives him to drink too much at night, which all together caused him to make a big error at work. Now he may never get to be on the board of the company, and the only reason he still works there is his uncle took his side with his father. He recently turned thirty and racks his brain for a plan to get his crap together and remembers in college he and Hannah had made a pact that if they were both still single when they turned thirty, they would marry each other. He realizes it is a crazy idea, but he decides to ask and see what she says.

Will tells her about his ex, but not her name. Hannah feels relief that she can see if she needs knee surgery from an accident a few years earlier. They make up rules and decided to give it a one-year trial period. They get married at city hall and take a honeymoon under the radar as they want to tell their families together later on. She was not prepared for the family wealth, vacation home in the Hamptons, and all the rest, but takes it all at face value. When she meets Will’s older brother Jon and his fiancé Madison, she can feel the tension but makes friends with Madison, since they will soon be family. What is even better is Madison is a physical therapist and Hannah starts getting therapy on her knee with her. Will’s father is not happy and the day after he meets Hannah offers to pay her off if she annuls the marriage. Will and Hannah deal with all kinds of things including both families, different work schedules and the fact that they both were in love with the other in college but never told the other.

I thoroughly enjoyed this modern chick lit. I love when a book stays in my head even when I am not reading it, and this one did that for me. I feel like Will and Hannah were meant to be and would have found their way to each other one way or the other. They had the most important rule in their “Ground rules for Our Marriage”: our friendship is the most important thing. They had some tough hurdles to get through, but by fighting for that more than anything they deserved their happy ending.