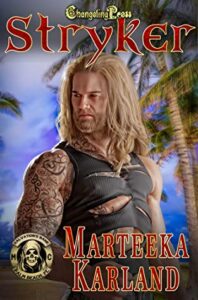 Stryker is a man who is willing to bend some rules but now he is ready to break a rule because of a pixie. From the moment he met Glitter he craved her but has resisted but he is tired of her invading his mind every moment of the day.

Glitter loves working for Salvation Bane; she considers every member family.  But she loves it when Stryker watches and she gives in.  There is one rule which must be followed and that is no intimacy with the members of Salvation Bane.

Glitter decides to take a walk on the dark side she discovers her family is in danger and she will do anything including sacrifice herself to keep them safe.  Stryker is determined he will never see Glitter hurt again but can he figure out who is stabbing the MC in the back and trying to bring them down before it is too late?

Marteeka Karland is a talented writer who creates a world with characters the reader can relate to.  I loved Glitter as she was such a bubbly soul living in a world willing to crush true beauty and innocence.  Stryker started out as the typical man and biker unwilling to commit but with time his character begins to evolve.  I enjoyed watching these two find their way and found I was interested in the other characters within the Salvation Bane and other MC’s in the book.