Gold by Maureen A. Miller 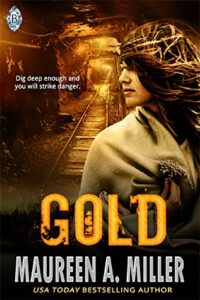 Sara Eckert moved to Alaska and bought a small bed and breakfast after heartbreak and humiliation in New Jersey. Her former fiancé asked for money to pay for a lawyer when he was under investigation, and then ran off with her money and his lawyer. She sold her very successful business to a neighbor and went as far away as she could and still be in the United States. The mostly solitary life she leads now suits her. She has the busy summer months with tourists where she usually earns enough to cover the slower months of winter. She just got a new reservation for January for a week. Her, for lack of a better word, boyfriend, Tim came by the night before the new renter to let her know he would be away for a couple of days on a long chartered fishing trip and seems slightly uncomfortable knowing the person coming is a single man.

Luke Reis is coming to Alaska, and more specifically Sara’s bed and breakfast, THE MARMOT HIDEAWAY, to investigate two men his company sent to the area to inspect a mining operation who have gone missing. The police and the mine have searched and reported they have not been able to find them, so Luke is going to search a little more under the radar.  His company, Blue-Link, specializes in investigating and researching for companies going into new areas in the most thorough manner so when the new company starts operating, there will be no surprises. Luke started the company with a friend he was in the Navy Seals with named Ray.  He leads a pretty solitary life as well since he mostly travels all over for work.

Sara quickly decides Luke is not a typical tourist. He gets her to take him out fishing for halibut and manages to get her to let him onshore across the bay on some land owned by Tim and the state that is uninhabited, at least by people, mostly. They walk inland a little and come across a small hut with smoke coming out of the chimney just as a man comes out carrying two AK-47’s heading into the woods. Sara knows the man is Noah, someone Tim lets live off the grid on his property but she and Noah are not on good terms.  They follow Noah until he goes into what looks like the entrance to an old mine. Luke decides to come back later on his own for Sara’s safety, so they head back, but she ends up falling into a trap and gets hurt. As he gets her back to the boat and does first aid, the injury ends up being mostly scratches on her side, they both start to realize there is some attraction to the other they were not prepared for. Over the next couple of days Luke and Sara dig a bit more into the mystery of Noah and the old mine in relation to the bigger mining operation Luke’s company is investigating. They also share some kisses and come to realize falling for the other is happening no matter what they tell themselves about it being a bad idea.

I delighted in this story and it was good clean romance. If you read a lot, especially in certain genres, you can mostly figure out aspects as you read that help you almost solve the mystery before the author reveals all. Surprisingly,  this did not happen for me in this book. The mystery had more layers and a couple of twists that were unexpected in a good way. I was rooting for Sara and Luke and Poopy (this is not a typo) the dog was the unsung hero of the story.