The Rebel by Joanne Rock 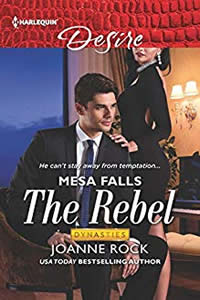 Marcus Salazar is co-president of Salazar Media with his half-brother Devon. Before their father died, he asked them both to promise to meet at a resort in Montana called Mesa Falls before they make any long term changes to the company. To say that Marcus and Devon don’t get along would be a massive understatement. They work on opposite coasts and see deception in every word and action of the other. Marcus wants to fulfill the promise to his father and convince Devon to let him buy him out of the company which he was the mastermind of.

Lily Carrington arrives at Mesa Falls in lieu of Devon, which only makes Marcus more infuriated. Lily’s is the company’s COO and works in New York as Devon’s right hand. Marcus thinks she was sent to spy on him, but has always been highly attracted to her, but kept his distance because she is engaged. After a conversation with Marcus, Lily considers the long-standing engagement and how neither she nor Eliot was in any hurry to set a date or even try to see each other, so she decides to end the engagement. Eliot’s first response was not about love, but related to whether or not the merger between their family’s companies would be affected, which makes Lily realize this is the right decision.

Another meeting with Marcus leads him to tell Lily he is very attracted to her, and he kisses her. The built-up passion between them is literally sparking, but she needs to think more before letting it go anywhere. She knows he does not trust her because she works with Devon. After a second kiss, he lets her know the next step is all hers, but either way he does not expect anything for the future, just mutual pleasure for now.

I enjoyed this book, but I really hope the next one ties up a loose end that was left in this one with regards to a suspicious woman nosing around at Mesa Falls, Regina Flores. The animosity between Marcus and Devon and the sparks between Marcus and Lily will keep you reading while they all try to move forward and deal with secret papers left by Marcus and Devon’s father Alonzo at Mesa Falls, as well as the future of the business and why Mesa Falls was so important to Alonzo that he made them promise to meet and spend time together there after his death.