Forever is Now by K. Vale

Who doesn’t love a rock star? I guess that would be me—I don’t just love a rock star. I love so many of them. My love of music and musicians—especially the hard rockin’ kind— inspired my book Forever is Now. 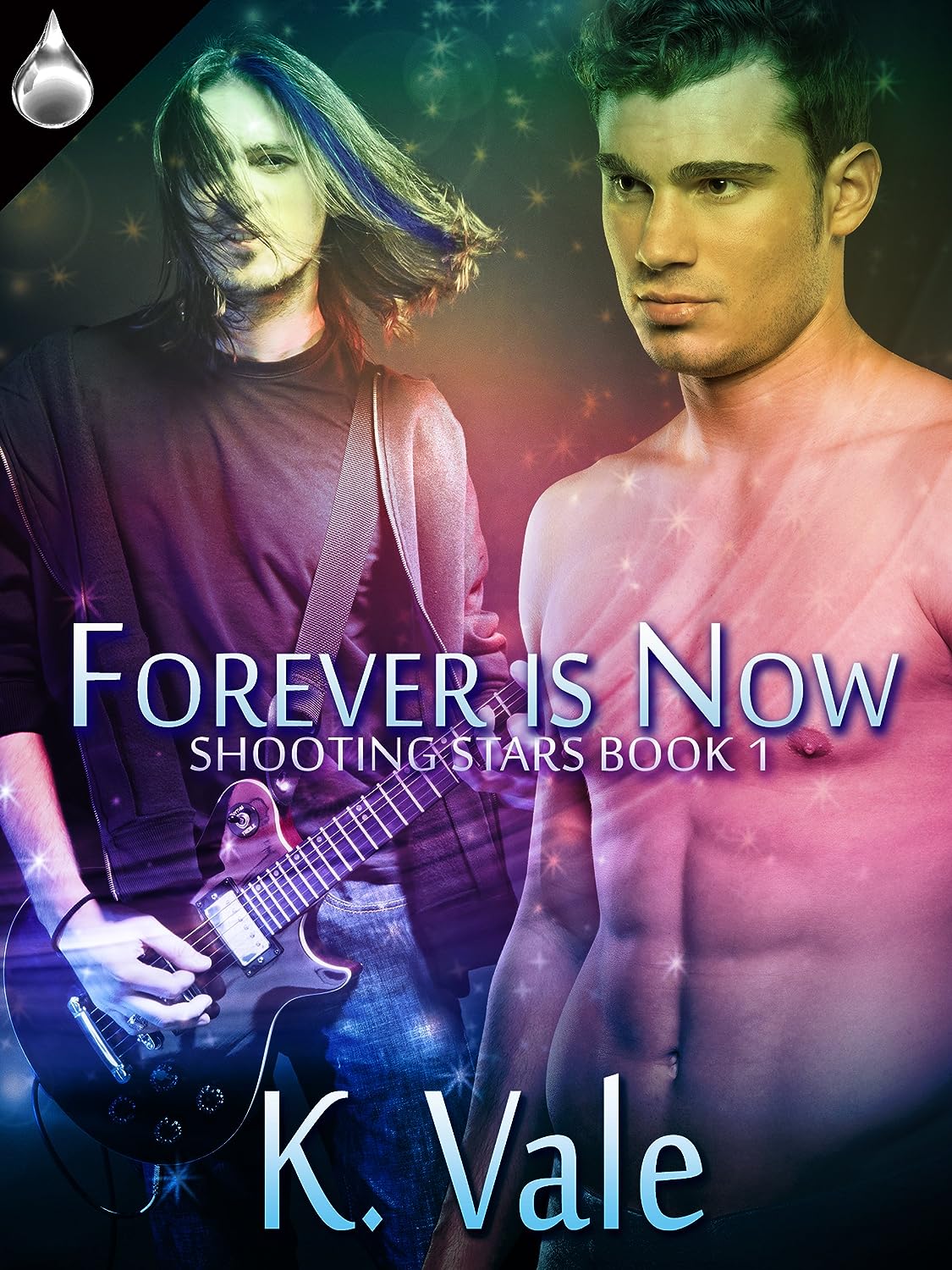 If you love someone, set him free. If he steals something of yours, hunt him down and make him sorry.

Alex Bremen is over Chance Ralan. Ever since his high school boyfriend ditched him nine years ago, Alex has barely thought of Chance at all. Sure, Alex attended a concert or two when his exâ€™s band, Armageddon Showdown, was in the area, but that was more curiosity than anything else. Who wouldnâ€™t want to see firsthand how his once clean-cut boyfriend transformed into a pierced and tattooed heavy metal god?

But when Chance has the nerve to record a love song Alex wrote for him years ago, Alex crosses the country to confront him. Revenge becomes a dish best served sizzling hot. The two men lock horns, but find the chemistry between them has only intensified with time, and occasionally love needs to do some growing up before it can be done right.

Excerpt from Forever is Now:

â€œI bet you never got over that first boyfriend, huh?â€ Delia must have been a scab-picker as a kid. She just did not quit.

â€œWell, he sounds like a real asshole, letting you go.â€ Delia shrugged.

Chance picked up his beer glass and chugged the remainder before he slammed it down on the table. He nudged the startled groupie, who scooted out of the booth with him right behind her. Like a pent-up and poked lion, he stalked to the bar. Judging by the two fingers Chance held up, he ordered a double of something clear. He threw back the shooter and stomped off toward the menâ€™s room.

â€œWhatâ€™s his deal?â€ Delia asked no one in particular.

Alexâ€™s glass was low, and he used the opportunity to excuse himself. Jools grabbed his computer and slid it over to pick up where he left off without a skipped beat. Miles racked pool balls across the room, while Jimmy laughed loudly and chalked his cue. Alex breathed a sigh of relief to see his assistant occupied.

He was so stupid for sticking his dick in that guy. Heâ€™d have to look for another position for himâ€”one where they wouldnâ€™t work closely together. Obviously, Miles hadnâ€™t gotten past it.

When Alex entered the menâ€™s room, he initially thought Chance wasnâ€™t in there after all. A toilet flushed, and the door on the end stall flew open hard enough to crash against the tiled wall behind it. Chance squinted at him as they both stood before the row of sinks, the rocker washing his hands and Alex giving him a dull stare.

â€œWhat the fuck are you playing at, Alex? Why are you here?â€

â€œWhat am I playing at? Youâ€™ve got to be kidding, right?â€

â€œLike you need any help with that, Chance. I think your head is fucked well and good, and itâ€™s got nothing to do with me. Besides, you sent me a goddamn bat signal on the airwaves when you used my song!â€

â€œSo, you didnâ€™t just show up â€™cause you missed this, huh?â€ He grinned maliciously into the glass while he grabbed his crotch in a mocking gesture. In the harsh lighting, even with his dark makeup ringing his eyes from the concert, and the ebony spiral of a dragonâ€™s body curling around his neck and disappearing into the ripped collar of his shirt, Alex could still see flashes of the boy he once knew. The row of stainless steel rings that marched up his left earlobe, and the skinny black leather pants, the anti-social hair and full sleeves of inkâ€”even the cold and cynical glint in his eyes couldnâ€™t completely mask the Chance Alex used to adore.

â€œHow could you sing that song? I know I lost the competition. You needed to be a rock star more than you need me. Iâ€™m over it. But here you fuckinâ€™ are, Chanceâ€”you made it to the big time without me, and without that song. The least you could do is show an ounce of fucking respect for what we had.â€

â€œI doâ€¦ I didnâ€™tâ€¦â€ He tripped over his words, and Alex shook his head, about to walk out. Distance was the best thing to have between them. Why did he think confronting Chance would bring some sort of resolution, some kind of healing to the wound that never closed no matter how much time passed? He should have known being so near Chance would tear him apart all over again.

â€œWait. Alex?â€ Chance exhaled a deep breath as if trying to decide if he really wanted to say whatever he was about to.

â€œI was drunk one night. I couldnâ€™t get you â€¦ that song out of my head. I just thought if I sang it, I could sleep, ya know? Cliff heard me. Said we had to cut it.â€ Chance shook his head as if to negate his words. â€œHe had the rest of the band pressure me.â€

â€œSo, once again, I lose to the band, huh? Itâ€™s classic Chance. You fucked me over for your career already! Years later, with an entire country between us, you do it again? I let you go, Chance. You should do the same.â€

â€œDid you really?â€ Chance turned toward him, closing the distance between their bodies. Alex smelled sweat and leather, and Chanceâ€™s breath held the essence of liquor as he spoke. â€œYou want to tell me you didnâ€™t think about me at all this whole time? Is that why you never tried to find me? Never called?â€

â€œAre you fucking serious? Is that what I was supposed to do?â€ Alex clenched his fists, torn between wanting to hit him, and dying to know if his lips, his tongue, tasted like vodka, or beer, or both.

â€œI see the world still revolves around you. Nice to know some things never change.â€

â€œYeah, some things donâ€™t. Your eyes are still that same amazing blue.â€ Chance leaned closer and the tip of his tongue flicked out to smooth his lips. â€œI still feel like I could just â€¦ dive into them and drown.â€

Fuck. A shiver of excitement rumbled through Alexâ€™s body. He had come here to yell at him, to make him realize what a self-centered prick he was. Hopefully shame him, at least a little. After that he was going to leave.

Instead, he leaned in, and his lips were on Chanceâ€™s. And, good lord, he tasted and smelled just the way Alex remembered underneath the burn of booze. Chanceâ€™s face was rougher against his chin and cheeks, not like the smooth-faced boy Alex used to steal kisses from. Damn, if the man wasnâ€™t so much hotter. He licked the seam of Chanceâ€™s closed lips and the guy groaned beneath Alexâ€™s onslaught while his mouth opened in response. Their tongues met, and Chance molded his warm body against Alexâ€™s.

Christ, he feels almost too good.

Alexâ€™s hand wrapped around the back of Chanceâ€™s neck. He loved the thatch of hair at Chanceâ€™s nape. Different color, but still reassuringly soft. Threading his fingers through the silky mass, he pulled Chanceâ€™s mouth closer, his tongue deeper into his own moist heat.

Alex smiled against Chanceâ€™s mouth as the rocker ground his hips upward into Alexâ€™s throbbing groin. The guyâ€™s cock was hot and hard, wrapped in buttery leather. It surged against Alexâ€™s hard-on.

The squeak of the outer door being tugged open broke the love buzz, and Chance wrenched guiltily out of his arms.

Alex turned on the tap in a liquid-lightning move and started splashing water around as nonchalantly as he could manage. The sink was the right height to cover most of the bulge in his pants, and he prayed it would be enough.

When Dave wobbled in with a shit-faced grin and a â€œHeyahh!â€ Alex knew they were safe. Chance was safe, actually, because Alex had quit giving a donkeyâ€™s dick what anyone thought about his sexuality a long time ago.

He ran wet fingers through his dark-brown hair and spared Chance a last look. He wouldnâ€™t even make eye contact. The guy was obviously freaked out of his mind.

Alex laughed out loud at the look of abject terror twisting Chanceâ€™s face, and gave Dave a nod as he walked out. His balls burned with disappointment, but his heart was lighter than it had been in a long time.

Check out my Name that Dog Blog Tour! Name the puppy in my next book and win a $20 GC, Â e-book, and more.